skip to main | skip to sidebar

I was riding the tram to work this morning and was nearing the stop I was to get off at, and outside the well-known city church I saw a banner which read, “Remember Hiroshima”. Today is August 6. I’d lived in that city for 2 years teaching English at a primary school, and the banner instantly flashed a huge number of thoughts, emotions and feelings.


I’d been to the Hiroshima Peace Museum where you read of personal accounts and graphically sense the reality of the horrendous moment. I learned to love the kids I taught English to, and thought that if something similar happened today, probably 90% of the kids wouldn’t survive. The school I taught at, and the apartment I lived in, are only 2 km from where the bomb was dropped. Many times I’d visited the Peace park, seen the famous Atomic Bomb Dome building remains, spend time with friends there, seen the school tours, and spent quiet moments there.

At 8:16 am (9:16 am Melbourne time), 6 August, it’s 65 years since the blinding energy was unleashed to cause instant devastation. Why did this have to happen? Why do these things still happen? Aren’t they the large-scale version of conflicts we have at times between friends, family, neighbours, colleagues? 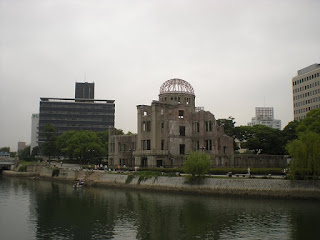 Posted by Brad Warden at 9:16 AM No comments: